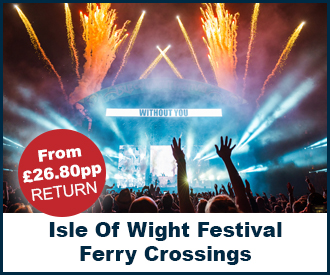 Enter your email to receive our latest ferry deals

How do I get the cheapest Isle of Man Steam Packet Ferries tickets?

Use compareferries.com to compare ticket prices across the range of routes that the Isle of Man Steam Packet company provide a service on; this includes return fares from Douglas, Isle of Man to Belfast and routes from Liverpool and Liverpool Birkenhead to Douglas.

To find the best and most competitive ferry crossing offers for your voyage, just enter your departure and return dates and browse through the list of journeys for the best day, times and prices for you. Prices start from £55* for a return fare

What routes do Isle of Man Steam Packet offer?

Isle of Man Steam Packet currently runs five routes from the Isle of Man; the ferry company provides services to Liverpool, Liverpool Birkenhead, Belfast, and Dublin, as well as to Heysham, Lancashire. Trips to Belfast, Dublin, and Liverpool each take just under three hours while a trip to Heysham takes around four hours.

Ferry services run regularly every day, so it's worth comparing prices at compareferries.com to ensure that you travel at a time that will get you the best deal.

Why should I book with Isle of Man Steam Packet Ferries?

Since then, the Isle of Man Steam Packet company has been the lifeline of the island, carrying almost 600,000 passengers and over 150,000 motor vehicles each year. Despite growing competition from airlines, this charming ferry service has seen a steady increase in passenger traffic in the last two decades.

Compare Ferries has the most up to date timetables, routes and fares for The Isle of Man Steam Packet. Use our ferry search to compare prices and to book your next ferry crossing.

Douglas to Dublin / Dublin to Douglas

Douglas to Belfast / Belfast to Douglas

Douglas to Heysham / Heysham to Douglas

We use cookies to make your experience on our site even better and to offer you the best experience online. They help us to understand how you use our site and tailor the adverts you might see.

By clicking 'Accept all' you're agreeing to our use of cookies. You can change your cookie preferences by choosing 'Manage settings'. If you want to know more you can read our privacy & communication policy.

You can manage your cookie preferences in the sections below.

We use these to understand how you use our website and services while on our page. This data is used to measure how many people visit each page, and what options they click on. We will only use these cookies if you give us consent.

We use these cookies to pick and show adverts that we think you would like to see, alongside our partners. They also let us measure how effective they are by checking the type of adverts and how often they are shown, as well as how you interact with them. We will only use these cookies if you give us consent.

We are currently searching for the best routes and prices for you.